I had just posted a genealogy cartoon on my facebook page a few days ago. Last night, the saying on it turned out to be very true. About 2am this morning I finally shut my computer down. 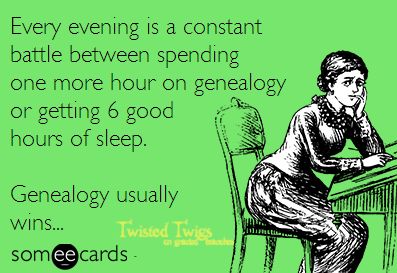 “Walk about Zion, and go round about her: tell the towers thereof. Mark ye well her bulwarks, consider her palaces; that ye may tell it to the generation following. For this God is our God for ever and ever: he will be our guide even unto death.” (Psalms 48:12-14 KJV)

Here is another view of the Richmond Castle:

“The ancestors of the American Richmonds were, if tradition may be credited, related to Alan Rufus the first earl, who built the castle.” “That they were originally of royal descent is not much questioned by English genealogists. Francis Thackeray, uncle of William Makepeace Thackeray, was descended from the Richmond’s of Wiltshire. He compiled a record of the Ashton-Keynes-Radborn branch, which corresponded with the recognized English ancestry of the American branch, except that he came to the conclusion that the American Richmonds descended through Roald, son of Roaldus. On the contrary, General Plantagenet-Harrison asserts his confident belief that the American line descended from Alan, son of Roaldus, le Ennase, claiming that his son Roald had no children. fn6. Allen’s “History of Yorkshire.”

“A generation ago Colonel John Richmond Webb, of the Wiltshire Richmond’s, said that he “could prove lineal descent from Edward I. and that his first ancestor, Roaldus de Richmond, rode by the side of William the Conqueror at Hastings field.” He added, “We were gentlemen when the Churchill’s were horse-boys.” [Excerpts for the article mentioned above.]

My 24th Great Grandfather was “Roaldus Musard de Richmond, who was with William the Conqueror at Hastings. He was one of the most powerful leaders accompanying the Norman invader into England in 1066.”

19th – Alan Richmond de Croft, “He claimed lands in Roppele, Clareworth, Wurthington, and Newland, county of Lincoln, in right of his wife, in the forty-third year of the reign of Henry HI., 1259. He married Mathilda, daughter and coheir of Peter de Goldington

14th – Thomas de Richmond, married Alice about 1430. “daughter and heiress of Thomas and Elizabeth (Nicholas) Webb of Draycott, Wilts County. Upon his marriage he assumed the name of Webb and quartered the Webb arms.

12th – William Richmond, alias Webb of Draycott, married Joan Ewen, daughter of John Ewen of Draycott. Had will in 1502.

9th – Henry Richmond, alias Webb, 1555-1634, “lived at Christian Malford, Wilts County. He was married four times and had twenty-five children. From this Henry Richmond are descended the Richmond’s of Ashton-Keynes, England.” [this is the part of the family that came to America.]

“One generation shall praise thy works to another, and shall declare thy mighty acts.” (Psalms 145:4 KJV)

I JOHN RICHMOND, the first American ancestor. Born 1594 in Ashton-Keynes, Wiltshire, England. Came to America in 1635 and was sixth part owner and founder of Taunton, Massachusetts. He died in Taunton, March 20, 1664. Married Elizabeth Christian in England.

“The words of the LORD are pure words: as silver tried in a furnace of earth, purified seven times. Thou shalt keep them, O LORD, thou shalt preserve them from this generation for ever.” (Psalms 12:6-7 KJV)

Do you see why I was up so late?

Genealogical History of the Richmond Family

One thought on “American Richmond Family Back To About 1066 A.D.”