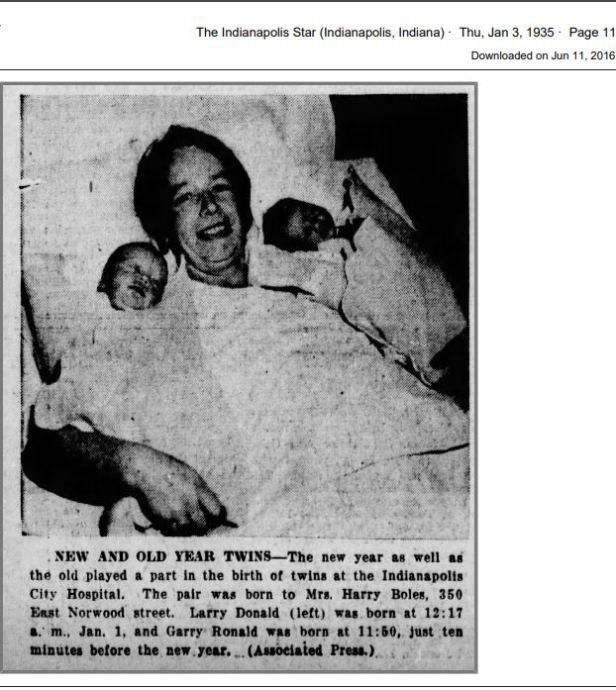 My twin brothers, were identical, and they could only tell them apart by their belly buttons, so I was told.

What is so unusual is that my mother, Gertrude V. Boles [maiden Bushnell] had them 27 minutes apart. That time span was over the change of the year from 1934 to 1935. The older brother, Jarry Ronald, was born on December 31, 1934 and the younger twin, Larry Donald, was born on January the first in 1935. He was the first New Year’s Baby for that hospital.

My mother had clippings from all over the country telling of their unusual event. The article above misspelled my brother Jarry’s name.

Jarry Ronald only lived about 10 months, but my brother Larry Donald is still alive, and as adventuresome as he has been during my lifetime, it would be hard to image two of them. Since I am the youngest in our family, I never had the privilege of knowing my brother Jarry.

Jarry and Larry were very sick when they were 10 months old. Larry just barely survived, but Jarry Ronald Boles passed away on October 22, 1935.  According to the Death Certificate, my brother died of “Acute Gastro Enteritis.” Today that could most likely have been cured, but that was in 1935. I have been mentioning records and articles as ways of verifying your ancestors in your genealogies. Here is a copy of the Death Certificate:

Also, we know that all of our lives are in the hand of the Lord.

“Who among all these does not know That the hand of the LORD has done this, In whose hand is the life of every living thing, And the breath of all mankind?” (Job 12:9-10 NKJV)